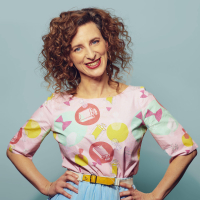 Felicity Ward is an award-winning standup, writer and actor. A hit at the Edinburgh Fringe (where she was given the Spirit of the Fringe award) as well as comedy festivals around her native country Australia, she has also toured Europe, the US and Asia. Taking to standup after appearing in and writing for the Australian sketch show The Ronnie Johns Half Hour, Felicity’s quick, energetic delivery has won over both audiences and critics. Combining sharp observation with physicality, self-deprecation and the big issues of life, she covers the profound and the absurd and everything from dating to cats to anxiety. Felicity’s TV appearances include Live From the BBC, Russell Howard’s Good News, Alan Davies’ As Yet Untitled and The John Bishop Show. As an actor she’s appeared in Josh Widdicombe’s sitcom Josh and The Inbetweeners 2 film.